great software, i cant wait to see how it all works.
I have downloaded and intalled the DoliWamp-2.9.0.exe on my IIS 2008.
i did not have php or mysql installed on iis previously, so i figured DoliWamp
should do the job.
well my IIS wwroot index.html works intranet and internet but index.php dont work.
while the DoliWamp server is runing, i can get to the http://localhost:81/dolibarr/ just fine using intranet but i can not access it through internet.
so i am sure i am missing a step somwhere.
so the question why dolibarr is not accesseble through the internet?

how can i find the missing bride bettween the iis wwroot and the dolibarr www folderrs.

I suppose you have tested your installation of PHP and MySQL. Now download the linux version of Dolibarr (not the windows or ubuntu version). These are simply all the files and directory structure which you have to unzip to a directory of your choice, preferably in c:/dolibarr, so you can easily find it if necessary. Go to IIS, right click Default Web Site go new->virtual directory, name it(ie dolibarr,doli,dbarr,…), and point it to the directory where you unzipped Dolibarr.

i read the post recommended few times, but i cant seam to have the virtual option! is that possible? in that case do you recommend to insatall php and mysql seperate than the dolibarr package and then install the linux package?

Yes, install mySQL and PHP separately and use the files within the linux package. Actually I don’t really use “virtual direectories” but I create a separate “Website” in IIS with a certain host header. If it’s a dedicated Dolibarr installation you can just put the files in the wwwroot directory. 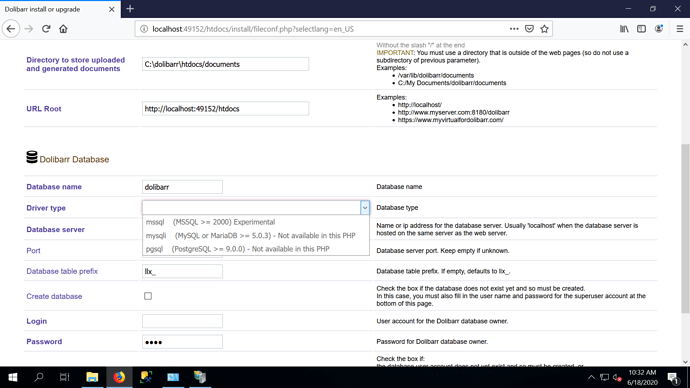 I was trying to Install Dolibarr 12 on MSSQL 2000, Yes It Works but It is not the way it works like Running on the New MYSQL Server. One Thing to note that MSSQL 2000 will only be running one Windows 2000, Windows 2003, Windows 2008 R2, as per my experience. It is not comparable with Dolibarr running on MYSQL 8.0.20., I understand that on MSSQL you can do a lot, like linking BRIO Query to MSSQL but I hope you will know that Running Windows 2003 OR Windows 2008 you will face the issue of PHP which is the essential core of Dolibarr.

So in my Conclusions: I will not sacrifice Dolibarr on MSSQL rather I would use MYSQL and run on Windows 2019 Server. But Dolibarr 12 is fine.